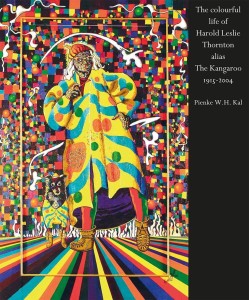 Compiled and edited by Willem Campschreur
With an art historical essay by Erica Kubic-Vegter
Includes a selection of Harold’s paintings, cartoons, poems and autobiographical notes

Harold Leslie Thornton was a highly versatile Australian artist, a unique personality whose walk of life is hard to distinguish from his artistic work. He was born in 1915 in Sydney, and passed away in that same city in 2004. In between he developed from being an apprentice sign writer, at a very early age, into a muralist and prolific painter and then into a subject who appeared as a work of art himself in performances, and there are also his cartoons, his poems and the fragmented autobiographical notes he kept. He even appeared as an actor in a 16-minute black-and-white film, Count Vim’s Last Exercise (1967) (a fragment is shown in the side bar), directed by Peter Weir. This artistic career, with only very little formal art education to lean on, took him from Sidney to the Australian outback in and around the little town of Griffith, to Papua New Guinea and then to Amsterdam and London.

Harold Thornton immediately felt at home in Amsterdam. To make things easier for his Dutch audience, he changed his artistic name to ‘Harold the Kangaroo’ and painted ‘The Greatest Genius That Ever Lived!’ on the back of his jacket. Both epithets stayed with him until the end of his life. For him, Amsterdam was ‘a magic city’ where he was affectionately accepted by the town centre’s community, which, at the time of his arrival, was rigorously protesting against the municipality’s demolition of a historic neighbourhood for new traffic infrastructure. Together with the lingering atmosphere of flower power, pop festivals and beer parties, the city was a unique and free-spirited environment that he hadn’t experienced before. In Amsterdam his artistic calling came to full bloom.

After some less than happy years in London where he created most of his cartoons, he returned to Amsterdam, and at the beginning of the 1980s went back to Sydney. Although 67 by then he had his most productive years there, painting large canvases full of colourful fantasies. He also supported the Greenies in their fight to preserve nature in Tasmania. Mainly living in Darlinghurst, Sydney, in this last period of his life, he became a popular character there.